A simple and rough comparison of Akamai and Cloudfront CDN's

In my day job, we have traditionally used Akamai as our content delivery network (CDN) of choice. For quite some time, Akamai was arguably the only true enterprise-ready CDN and our clients demand a high level of service, hence Akamai is/was a good fit in most cases. The CDN world has definitely changed over recent months and years with many new players entering the market and many existing players strengthening their offerings - Amazon Web Services (AWS) Cloudfront is a popular CDN amongst these newer/improved offerings and has caught my attention, not least due to it's pricing.

AWS in general has been very disruptive in the market, offering very low cost services which are perhaps not always as comprehensive as competitors but fit the requirements for a large number of people/companies/projects. AWS Cloudfront is very much of this ilk, currently, although expanding it is quite basic as a CDN (it lacks many features offered by companies such as Akamai e.g. DDoS insurance, WAF and so on) but is as much as an order of magnitude cheaper than major competitors so if simple object caching is what you need (HTTP or HTTPS) then Cloudfront may well work for you.

Akamai still has by far the largest CDN in terms of PoP's (Point of Presence - i.e. CDN nodes) however the newer CDN vendors typically state that they operate under a different model, going less for sheer scale and more for strategically placed so-called super-PoP's (i.e. less PoP's but used more effectively).

As I've been using AWS more and more, I wanted to have a simple but reasonably meaningful (to me at least) comparison with it and Akamai so I set up something to achieve this which is as follows.

This test is semi-scientific, i.e. it is simple but relatively logical and is as fair as I could reasonably make it (since I'm running it in my spare time). The test is not supported or endorsed by either Akamai or AWS, nor is it influenced by either company or by my employer.

The results I observed under these conditions are as follows:

Here's a graph of these results: 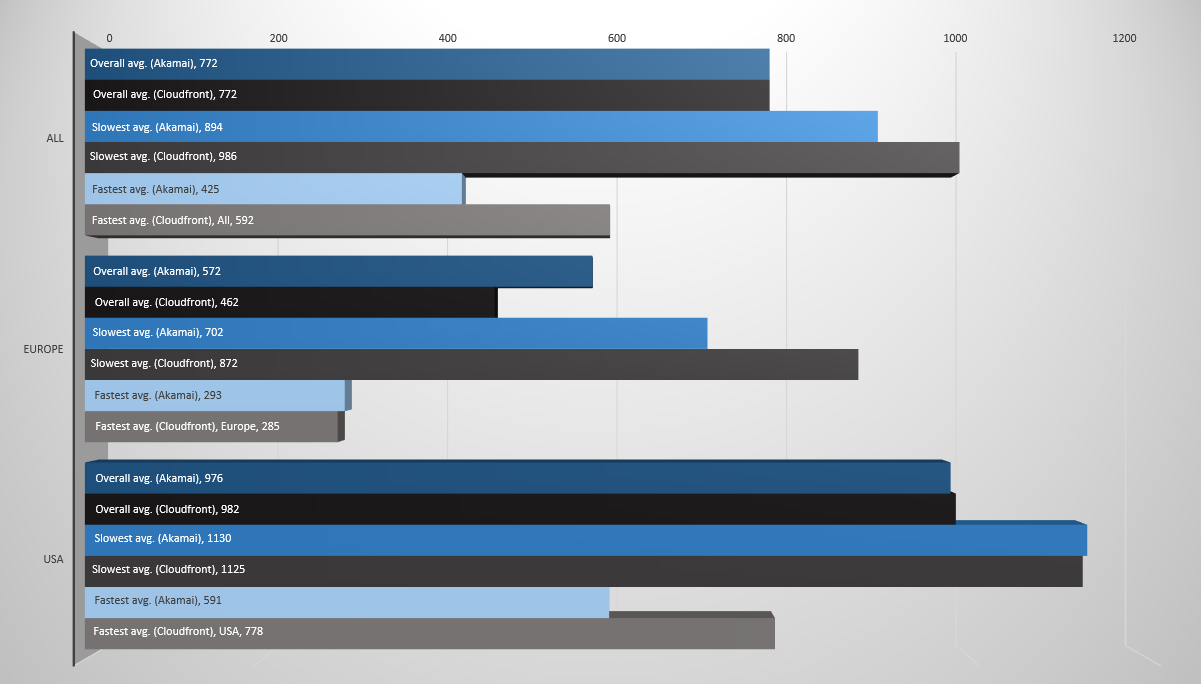 The fastest/slowest times are somewhat more variable than the overall, this may be a result of Akamai having a larger and potentialy more stable (under heavy load) network of PoP's or perhaps the Akamai architecture is more able of coping with heavy traffic (overall internet traffic). Akamai has an edge -> midgress -> origin architecture and to my knowledge (please correct me if I'm wrong via comments) AWS is more direct, edge -> origin. Alternatively, it may be something I haven't thought of.

It would be nice to have been able to test from more locations around the world and for more than one origin. This would perhaps better point to the reasons behind the differences

This is a semi-scientific but very small-scale and relatively limited test/comparison but I haven't seen another similar so wanted to put it out there in case it's helpful. Read into it what you will but you should do thorough work of your own before selecting a CDN.